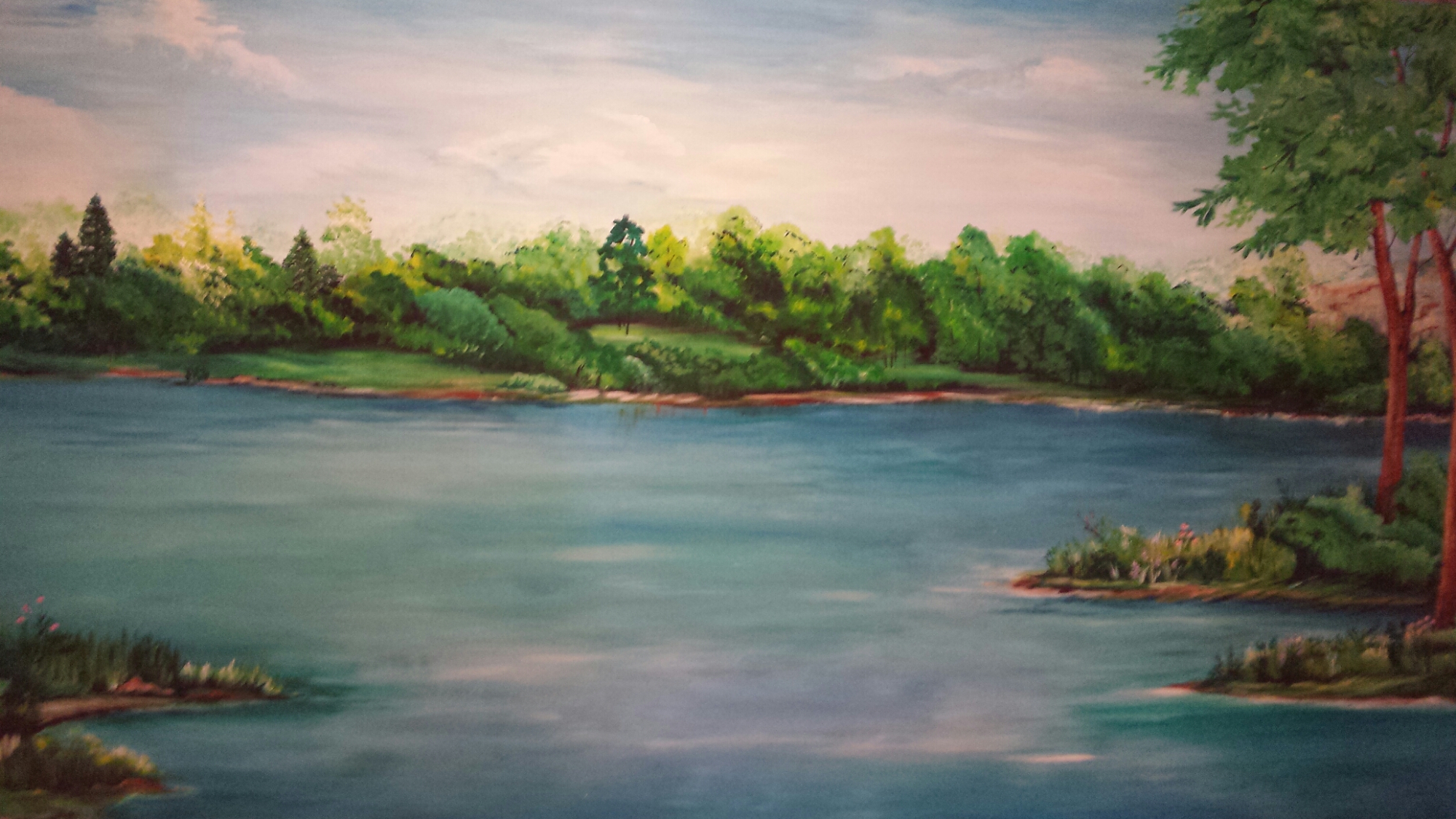 It was a beautiful service at church today.  We are blessed with so many children.  It is a joy to watch them grow spiritually.    Today we began with the baptism of two of our children.  So thankful. We ended the service with the Lord’s… 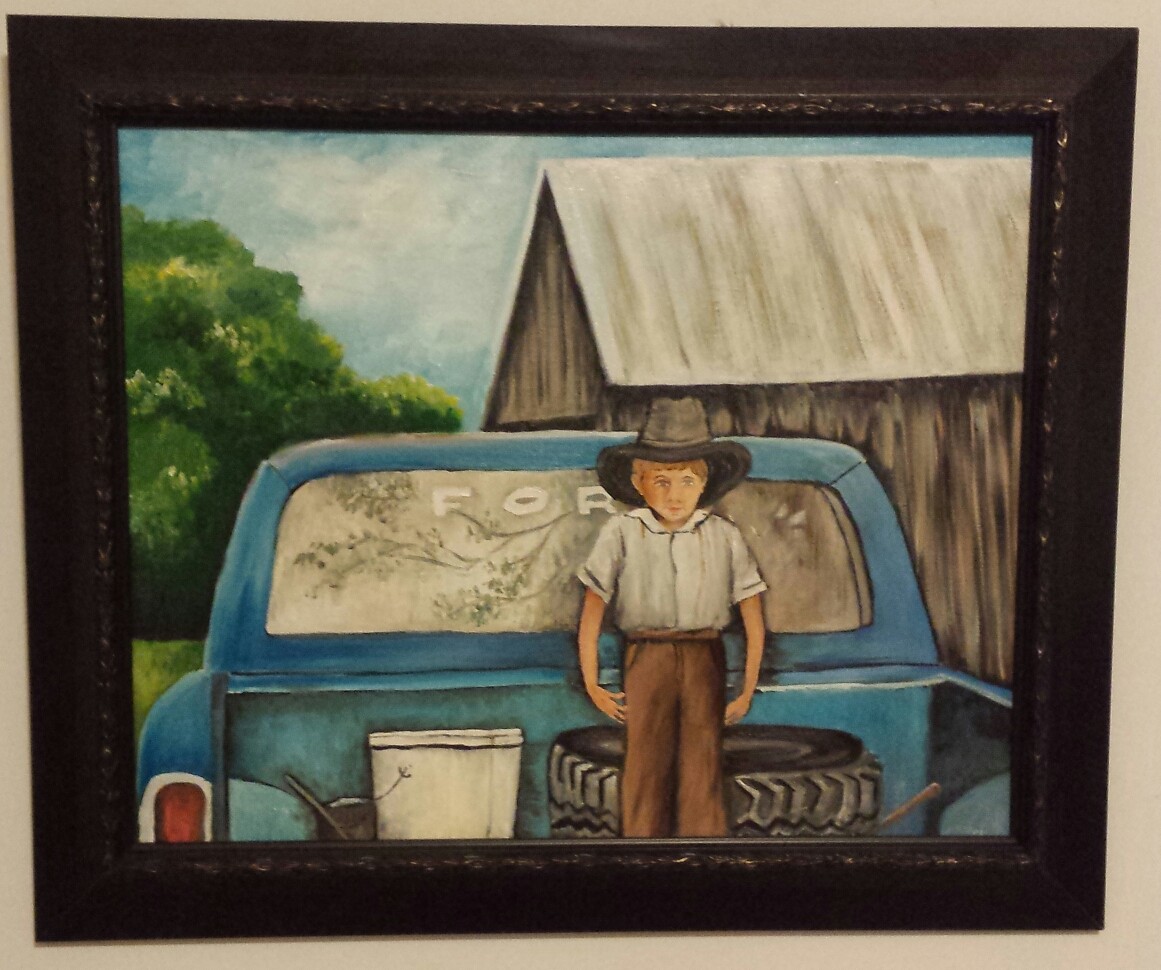 I spent the day with my father.  He will be turning 90 years old next month.  Although he doesn’t feel well most days , he always has plans for the days and times he feels pretty good.   I admire his patience and endurance dealing with… 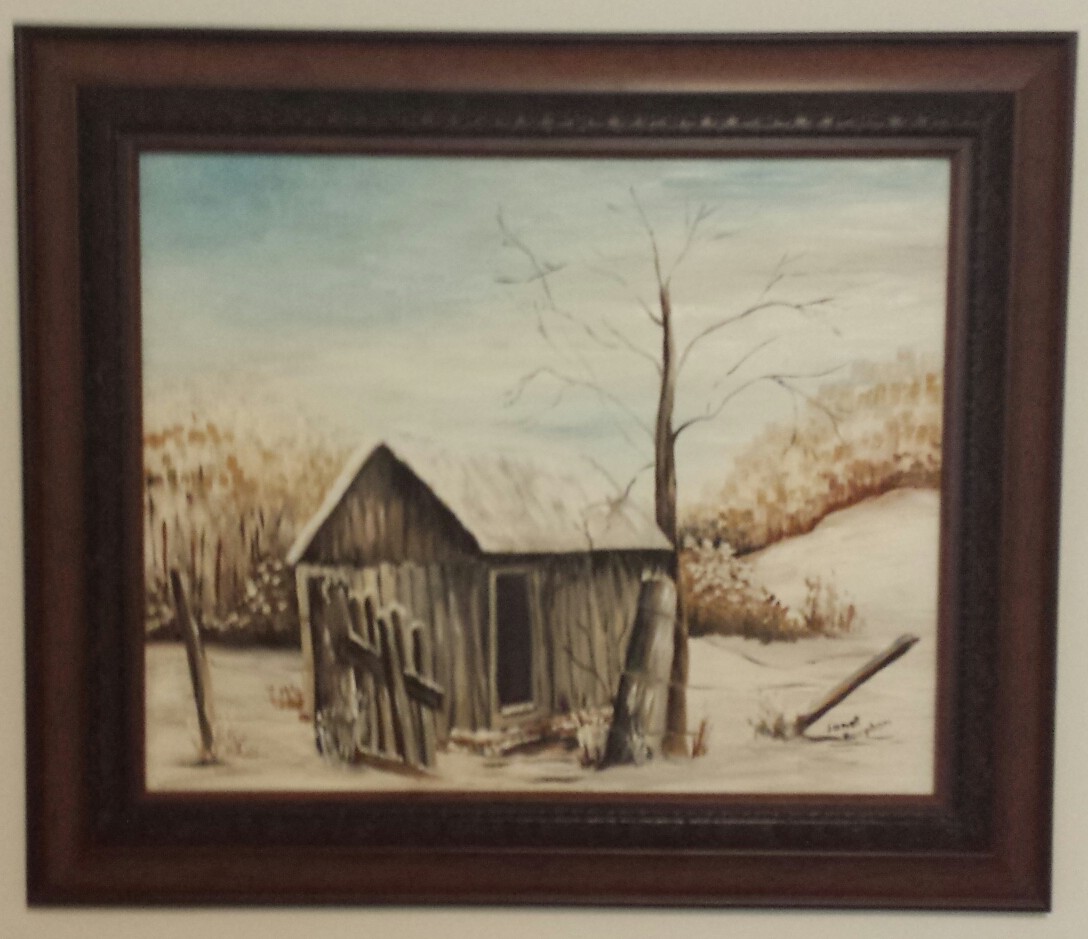 Most older farm houses have a barn and other out buildings around it. Grandpa and grandma had several.  Our favorite was the little chicken house.  She had a big hen house for her laying hens, but the little house was for her settin’ hens and the new baby chicks when they hatched.  The little house looked like a real house with windows, a door and a wood stove

One winter the whole family had gathered to celebrate Chrismas.  After dinner the girls decided it would be fun to make taffy.  The moms unanimously said, “no.  It would be too much mess in the kitchen,” they reasoned.  That did not detour the plan.  We headed to the little chicken house and built a fire in the wood stove.  With the help of grandma we collected the items we needed to make our taffy.

After much stirring, giggling and questioning we announced our candy had reached the soft boil stage.  In no time we were stretching our taffy.  It probably wasn’t the best taffy ever made, but it sure made for a memorable day.  I don’t really remember, but I’m sure it was all eaten that day.

In the garden of life our precious memories are the most beautiful bouquets. 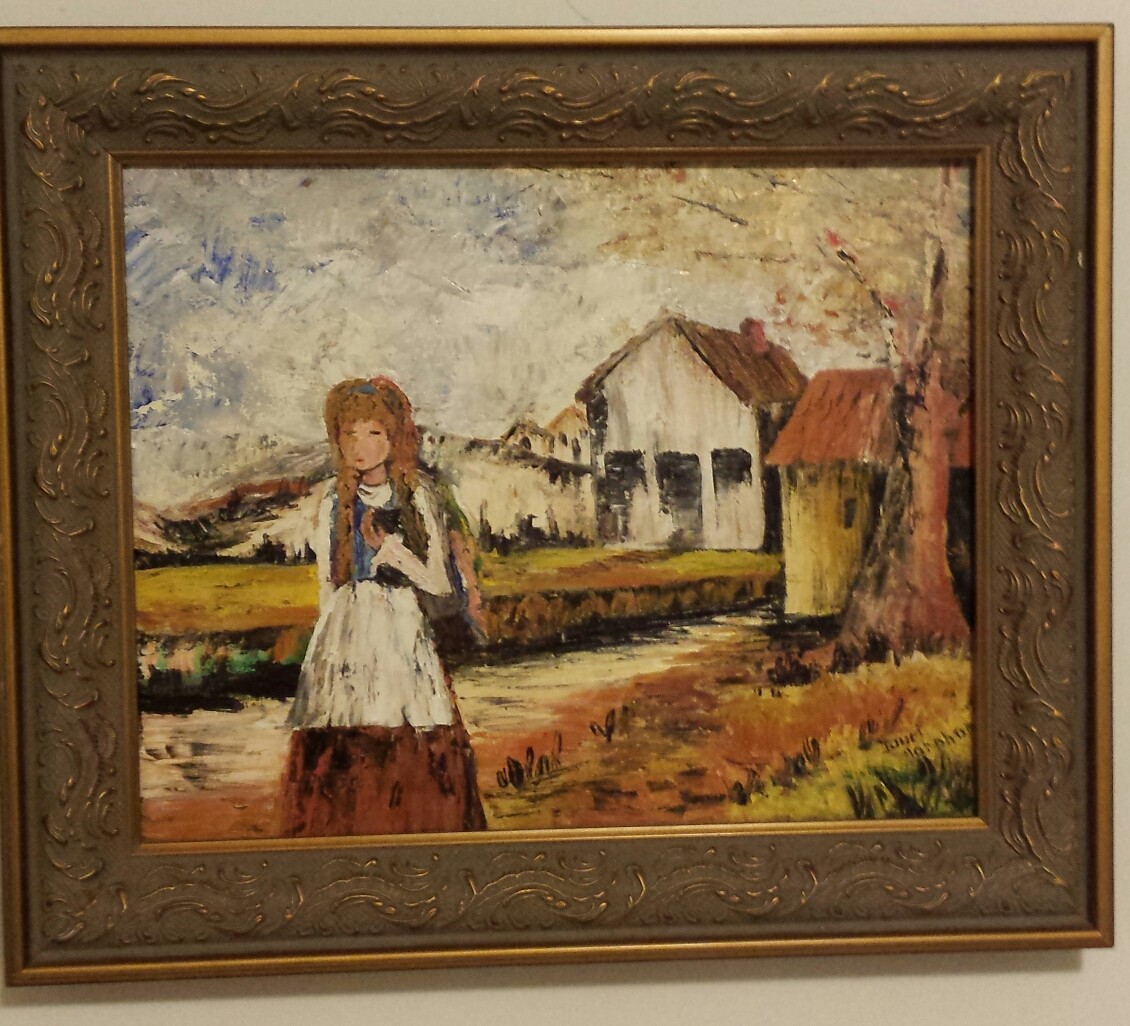 Painting can take you on many journeys.  It often creates people and places from your mind.  These people and places may seem familiar or unknown.  The colors and textures either connect us or make us feel lost in the picture. As I painted the young… 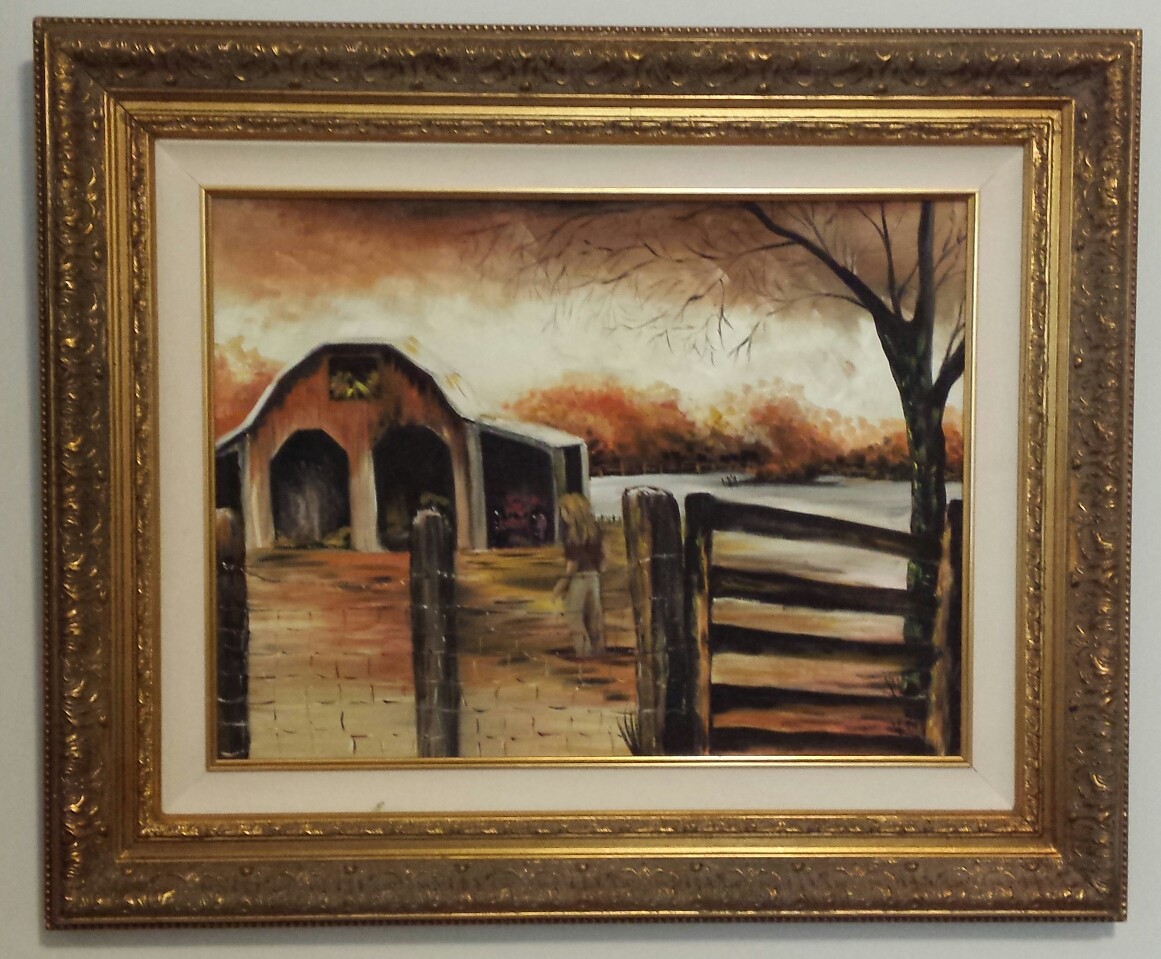 Everything in our world rotated around the farm including our play.  We, of course, did not have a room full of toys as my grandchildren do.  Instead we made up our own.  One of our favorite playtime activities was building a minature farm.  We would… 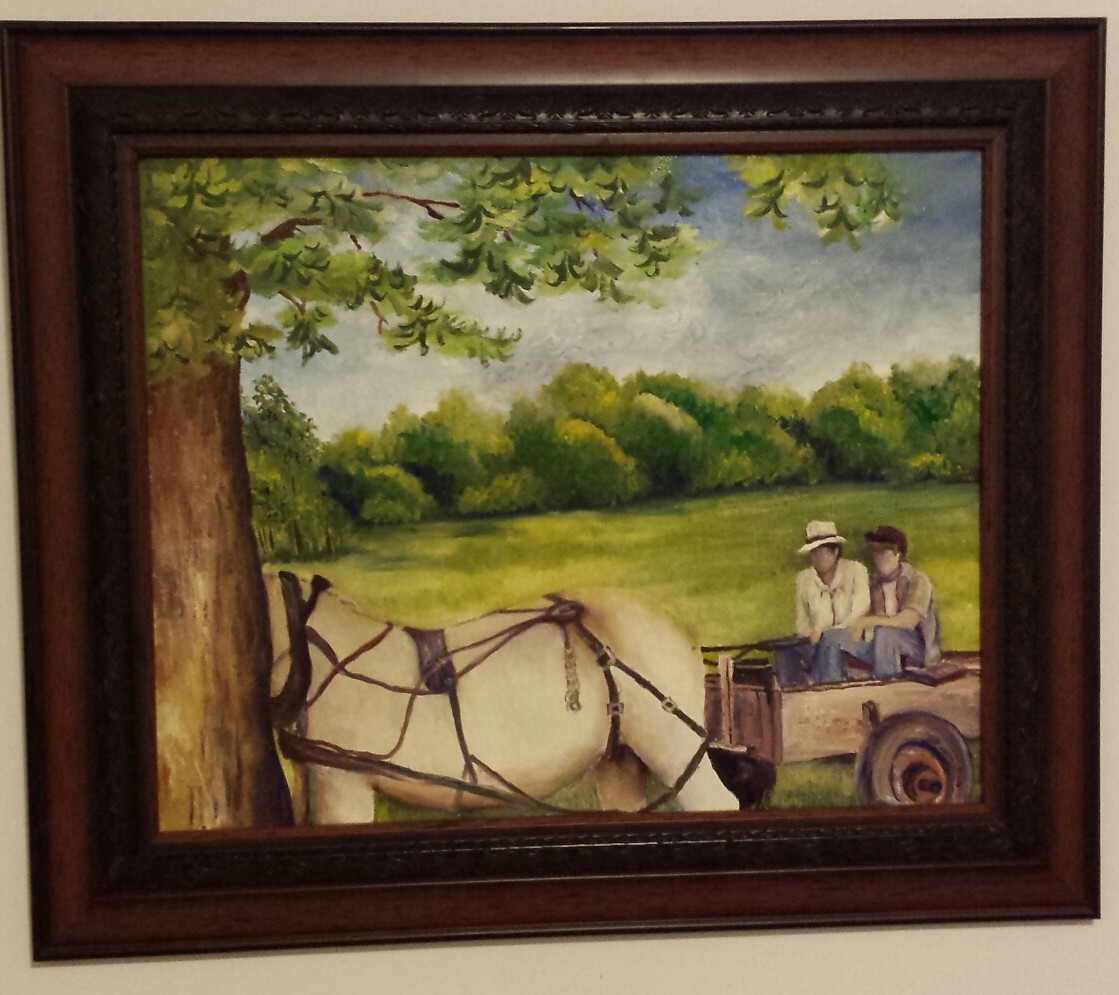 Summer has been in full swing.  We planted a fall garden.  The brush hogging is getting done and the hay is baled.  The big bales make life on the farm much easier.  The tractor does the hot heavy work. 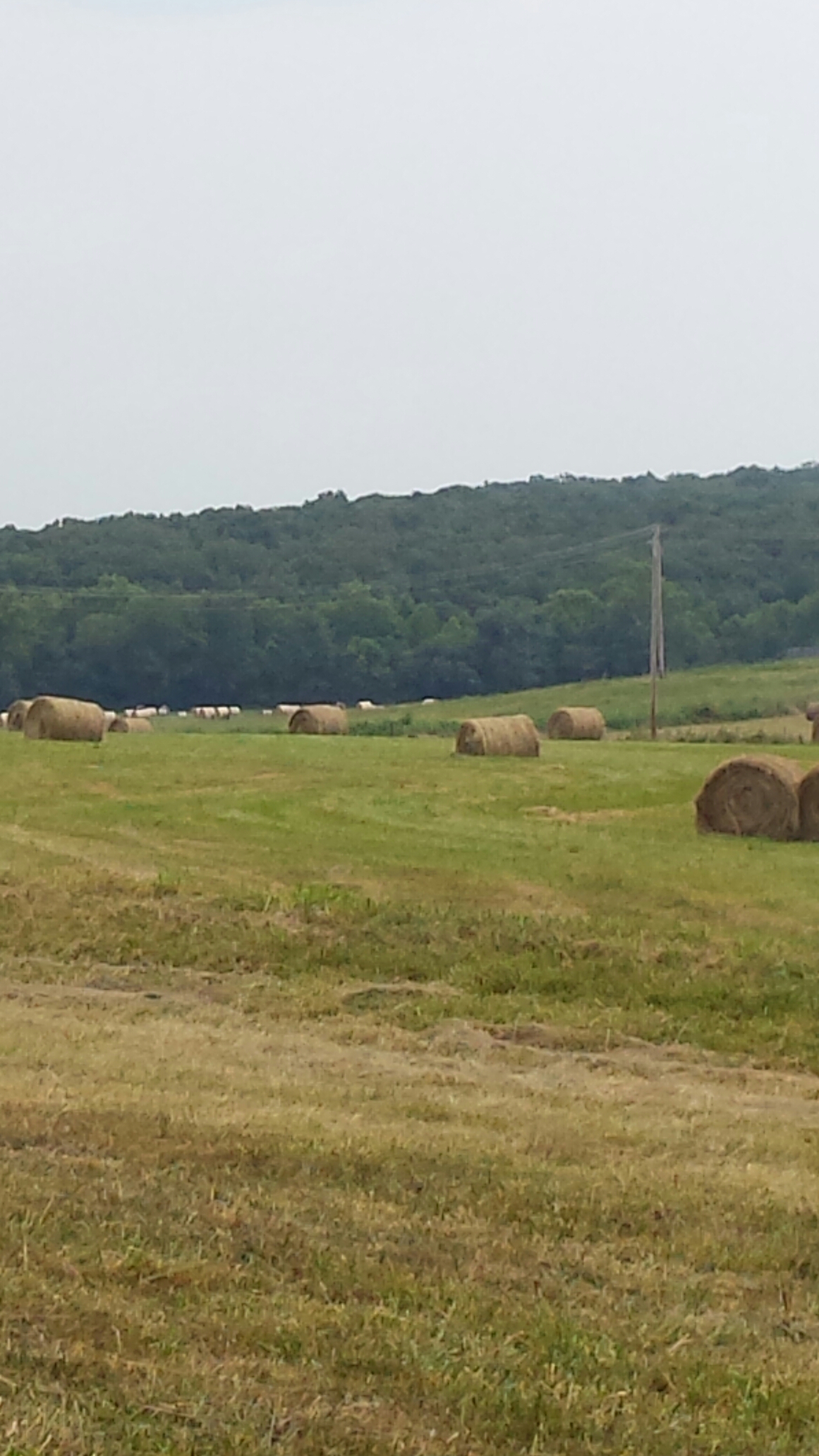 Growing up we always had small square bales.  They had to be picked up in the field and stored in the barn.  One of us would drive the old farm truck and trailer.  Someone would be on the trailer to stack the bales when they were handed up.  The others would walk along side the trailer and throw the bales on as the truck came to them. It was really hot work.  There wasn’t any shade in the hayfield.

Once the trailer was full the hay was stacked in the barn
Daddy had a hay elevator that would run the bales up into the hay loft.  Some of us would load them on and the rest would stack them in the loft.  Everyone generally came in soaked in sweat ready for mother’s delicious dinner and a good glass of cold well water.  Often neighbors would come in and help with haying so mother had to have a big meal prepared for all the hay hands.

When daddy was a boy his father stored his hay in big stacks in the field.  You would start a big pile of hay.  As the stack got higher they would make it wider.  This would help keep rain from running into the stack.  You had to keep the center really full also to help keep the water running out.  The stacks were usually from 12 to 14 feet high.  It would take about 3 acres to make a stack.   A fence was built around them to keep the farm animals out.

The painting is a picture of my grandfather and one of his grandsons.  Grandpa was still hitching his team and taking his ax to cut sprouts long into his 90s.   Sometimes the city cousins came to visit grandma and grandpa.  Of course grandpa still hitched the team and went out to work.  On one occasion grandpa began to chop sprouts with his ax.  My cousin said, “Here grandpa,  let me slice one.”  Needless to say grandpa got many chuckles out of that and you could only guess, my cousin soon earned the nicknsme slicer. 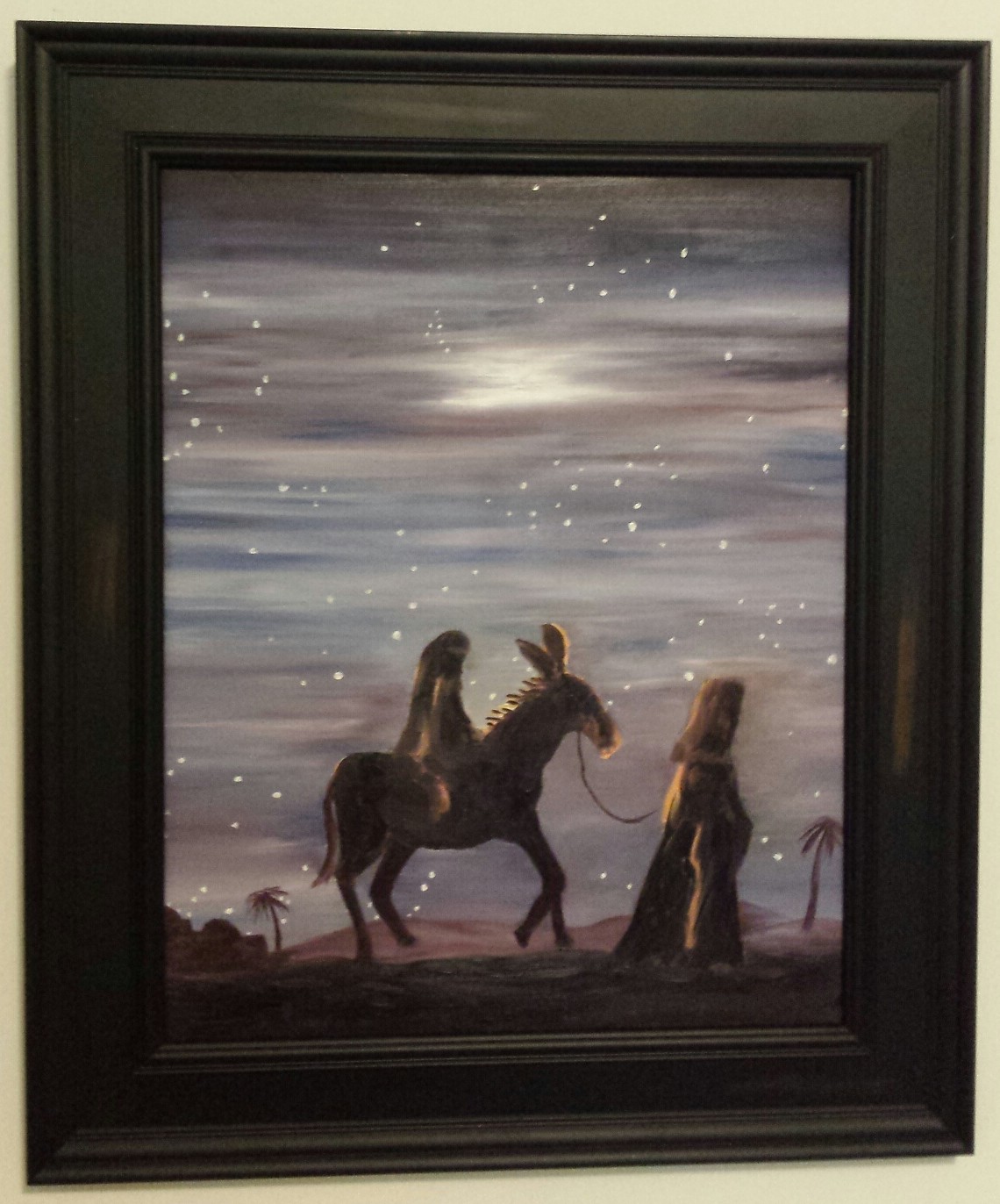 The Story of the Stars

While writing one of my VBS programs, I became very interested in the names of the stars and constellations.  The more I researched the more amazing the story became.  God told us that he made the sun, moon, and stars to mark time and seasons. … 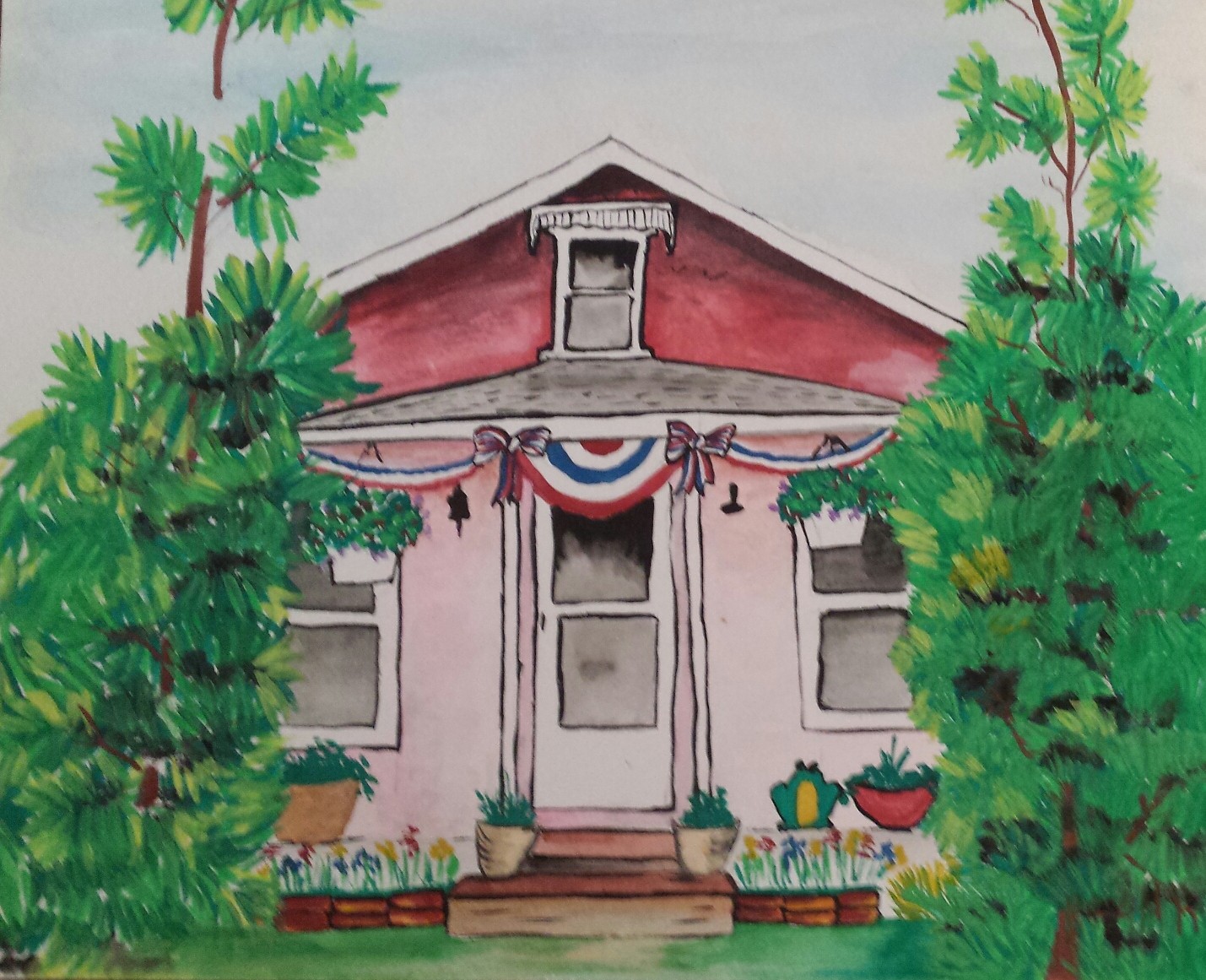 I occasionally like to paint with watercolor.  I painted this picture of my grandparents little farmhouse.  We had decorated it up for our 4th of July celebration.  The farm has been in the family for over 100 years.  My great-grandfather brought his family to Benton… 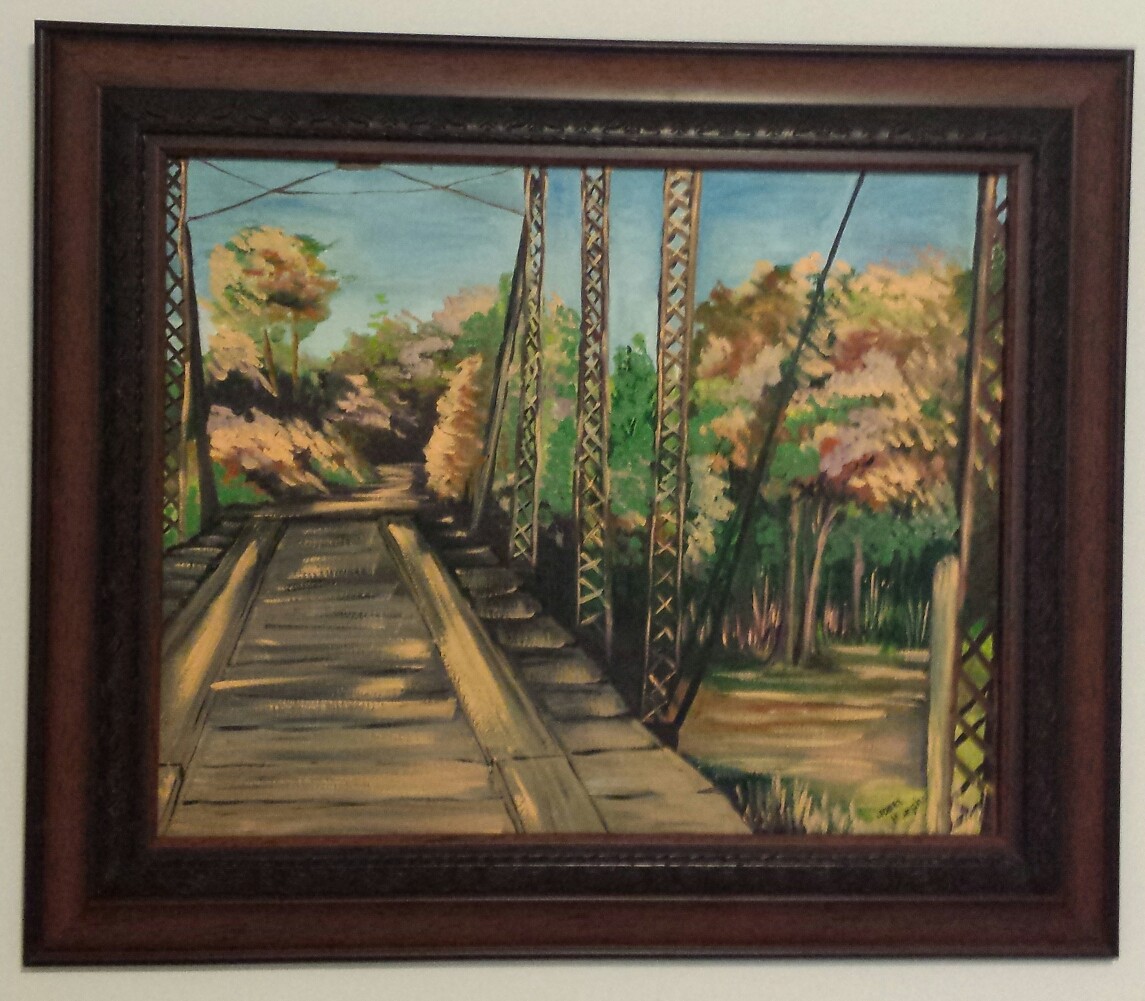 Hope You Make it Bridge

Our farm in Rockville was much closer to Monegaw Springs than Rockville.  The Monegaw area was riddled with rich history.  The famous Younger brothers were in a shootout there killing one of the brothers.  Legend has it that Chief Monegaw died in the big Monegaw cave.  The town once housed a huge hotel for visitors who came for the healing spring water.  When we moved there people still came to the spring to get water.

My husband has always heard that one scene of the 1939 film of Jesse James was taken there.  He rode his horse off the Monegaw cliff to get away from the sheriff.  Don’t know if that is true or not.

Our 173 acre farm was very secluded.  You had to travel a small gravel road any direction you came in.  The old bridge we had to cross was very old.  There were loose and broken boards.  Every time we crossed it someone would say, “I hope we make it.”  Although it looked unsafe, it was sad to see it go.  The construction of Truman Dam changed much of the area.

The painting is a picture of that old bridge.